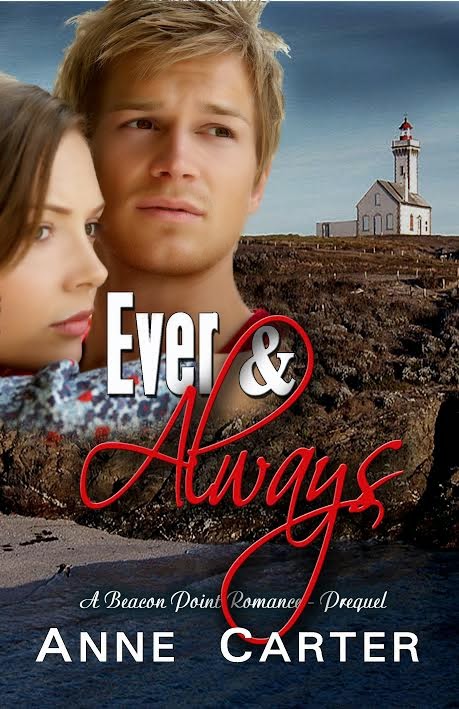 "I can skate faster than you can fall," Jack whispered, and Mad

die closed her eyes against the shiver that enveloped her body…

Ice Hockey. Strong coffee. His infant son, Duncan. Three things Jack McKenzie could not do without. Now he was about to add a fourth. Beautiful, green-eyed Madelyn Cross has reappeared in his life with a load of baggage and a history riddled with emotional landmines.

They almost hooked up in high school, but their fathers had different ideas. Now, years later, their paths cross in a beautiful Southern California park. Each has a son, and each has an unhappy past; both share a need for love, passion and devotion. But can Jack solve the mysteries in Maddie's past, overcome the specter of her dead lover and still come out the hero? 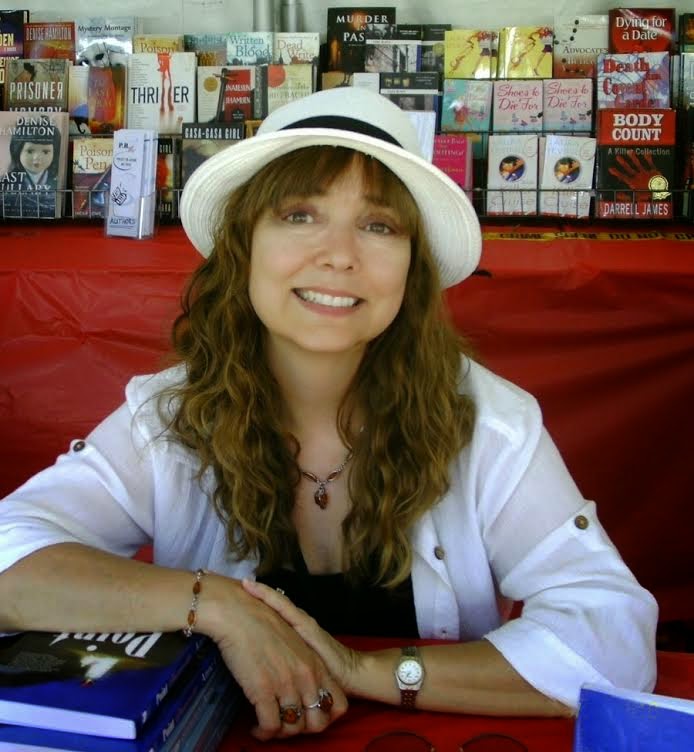 Creating fiction gives one the power to design other lives, filled with romance and adventure, intrigue and passion. My own writing career began in middle school creative writing class, inspiring me to later major in literature. All it took was one teacher' encouragement and I was on my way.
I'm the author of seven published novels, including mystery, romance, paranormal, alternative romance and even a pair of middle grade readers. As for the personal stuff, I'm a Virgo, a procrastinator, like warm better than cold and drink neither Coke nor Pepsi. I was born in the Midwest but migrated to California as a child. My hobbies include doll collecting, lighthouses, photo restoration and writing, of course. My favorite sport is ice hockey, my favorite TV shows include Elementary, Person of Interest, NCIS, Downton Abbey, The Blacklist, and Grey's Anatomy. I am married to my hero of 30+ years and have 3 great kids!
Author links:
http://www.beaconstreetbooks.com
https://www.facebook.com/AuthorAnneCarter
Email:  annecarter@beaconstreetbooks.com
Amazon: http://www.amazon.com/Anne-Carter/e/B002BM84XA/ref=ntt_athr_dp_pel_1
Buy Links: Amazon:  http://www.amazon.com/Ever-Always-Beacon-Point-Romance-ebook/dp/B00K5CKXIW/ref=la_B002BM84XA_1_9?s=books&ie=UTF8&qid=1399384565&sr=1-9

“You can do this. I want you to skate alone around the rest of the way.”

“Trust me, Maddie. You've got to trust me. I’ll be right behind you.”

“I can skate faster than you can fall,” he whispered, and Maddie closed her eyes against the shiver that enveloped her body. He gave her a little push and she began to skate, dreading the moment he would let go. And of course, he did let go, hanging back to give her room to skate ahead.

The girls at the window were rapt, whispering and giggling quietly as they watched their hero skate with his new girlfriend. Even some of his teammates stopped near the locker room door to watch the arena and the attention Jack was paying to the pretty girl in the pink sweater.

God, I have to do this. Trust Jack. Don’t let me fall!

Slowly, carefully, Maddie took the curve at the far end of the oval rink, concentrating on looking smooth and capable. She didn't dare wonder if Jack was still behind her, or how far away he was. She kept her eyes on the exit door. She was doing fine until the sound of an engine, a loud sound akin to that of a giant lawnmower, pervaded the rink and startled Maddie from her ice exhibition. Abruptly she turned her head in the direction of the sound, and the break in concentration disrupted her momentum, making her off-balance and wobbly.

Instantly she looked down at her skates, trying to get back into rhythm, but it was too late. She tried to remember how to drag the toe of her skate to brake, and in doing so made herself even more insecure. Terror filled her head. Oh no, I’m going down!

The thought did not even fully cross her mind and Jack was with her, his arms not merely grasping her waist but wrapped fully around her, the heat of his chest warming her back and shoulders. Looking forward, Maddie realized they were only a few feet away from the rink door.

They slowed to a stop, but still he held her, his lips close to her ear.

“Now, is there anything more I can do to earn your trust?” he whispered before kissing her neck briefly. He waited patiently for her to catch her breath, to calm down from her scare.

Maddie closed her eyes. Jack’s show of affection was not lost on her, but she hesitated to acknowledge it for fear that she was over-reacting. Perhaps it was only in sympathy, a consolation for her pathetic performance. Taking a deep breath, she mentally forced aside the exhilarating feel of his lips against her skin. But she could not begin to slow the wild flutter in her chest.

“Just tell me, who is Sam Bony, and what is that awful noise?” 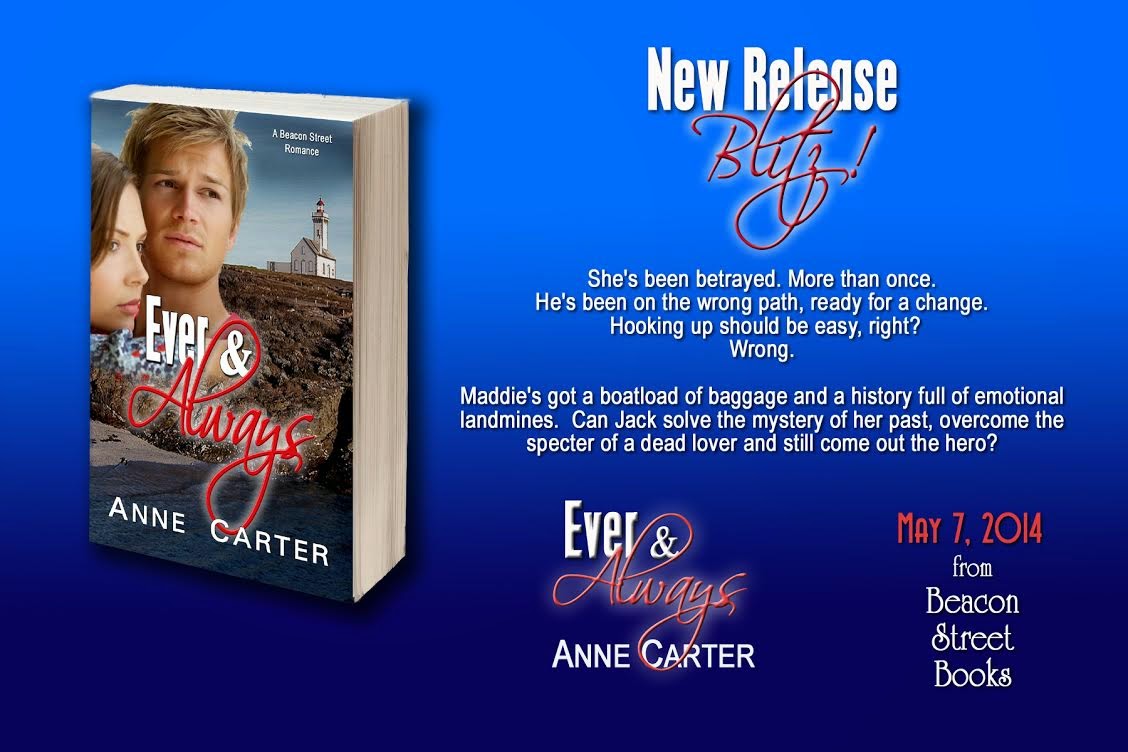 My Review of Ever and Always

Ever & Always has to be one of my favorite Anne Carter stories. It brings everything together for me and allowed me to fall in love with two of the characters that I wanted to know so much more about from the other books. Maybe it was because E & A was more romance that mystery. I love mysteries and loved the mysteries behind the other books in this series, but what can I say, I'm a romantic and love reading the romance aspects of the stories. I read Point Surrender and Cape Seduction awhile ago and loved them, but when I read Ever and Always and found out what great people Jack and Maddie are, I was thrilled. And yes, they must be real people, because they just came across that way for me. Ms. Carter, a master at story telling, made them real. I know they exist somewhere and I would love to meet them and be friends. Jack and Maddie's story solidified this series for me. Being a hockey fan, I loved that Jack played hockey and I loved the way he related with Maddie's young son. I won't give anything away about Sam (haha) only a true hockey fan will pick up on that one. The way Jack gains Maddie's trust has to be one of the most fun and romantic ways I've ever thought possible. (read the excerpt). Great story. Great prequel to a fantastic series.
Posted by Author Susan Griscom at 12:00 AM