Now for something a little different. A mystery! Not just for the men out there! Quite a few of us ladies enjoy hard-boiled mysteries. I know we all enjoy great female characters, and in Falling Immortality,  a mysterious woman named Dragon Lady will knock your socks off. Sound exciting? Yep!


Please join me in a warm welcome to Robert Downs, author of the fantastic Falling Immortality: Casey Holden, Private Investigator, as he talks about why he writes MANfiction. In addition, Robert is offering one e-book and one print copy of Falling Immortality to two lucky winners. 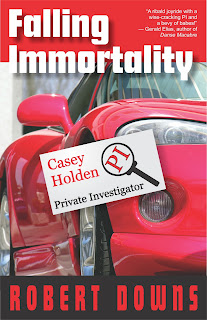 A debut, hard-boiled mystery fiction for men. Stephen King’s son describes a fitting genre as MANfiction (the opposite of Chick lit).

Casey Holden, former cop, current PI in Virginia Beach, VA, screens his clients the way he screens his women, based on whichever drop-dead gorgeous woman happens to waltz through his door first and manages to hold his attention. So when Felicity Farren, widow-at-large, struts into his office asking him to solve the two-year-old murder of her husband Artis, she intrigues him. When Casey starts digging, he learns the murder isn’t what it seems to be and he doesn’t have a big enough shovel to unearth the truth. And to top it all off, his former rival at the police department, Greg Gilman, is determined to disrupt his investigation. Casey's challenge is to learn what really happened to Artis, and why Gilman can’t seem to remove his head from his butt. And he’ll need all of his wits to complete the task.

The question is a rather simple one, but the answer proves a bit more convoluted. Honestly, I can’t imagine not writing in the genre. I had a character, and that character had a story to tell. It’s not really much more complicated than that. While Casey and I may not share very many characteristics in common, he’s as much a part of me as my left arm. He gives me a voice when simple words seem to get lost in the shuffle. He’s a symbol of justice, and while he has a moral compass a bit different from you and me, he’ll do whatever it takes to solve a case.

I devour mysteries with strong male leads seven days a week, and I crave action as much as die hard Steelers fans crave football. For me, it wasn’t a matter of choosing the genre, because it was popular, or because I thought it would lead me to fame and fortune. It was the exact opposite: the genre chose me. I had no idea what MANfiction was, or even that it existed, and at the time I began writing Casey, I had no idea where I would go with his story. But it was the first manuscript I connected with on a deeper, more meaningful level, and it was a story that I kept coming back to despite years away from it, when life managed to get in the way. And get in the way it did. But I knew it was the first story I had to get out there, despite the criticism, despite the uphill battle, despite the constant reminder of marketing to a group that doesn’t read, despite the severity of the odds stacked against me. I knew it with as much certainty as placing my hand in front of my face.

So why write MANfiction? I guess the simple answer is that I wrote the story that I had to write, and the exact character that was meant for me and me alone. That’s the bottom-line. It took me seven years to see publication, once the vision for Casey first entered my mind, and if I had decided to publish for any other reason, I would have given up years ago, and moved on to another tale. But I didn’t. The bond was made from my first vision of the character, and it’s a bond that’s only grown stronger with time. As the connection deepens, not only do I discover more about Casey, I also discover more about myself. And that discovery keeps me coming back to my computer day after day, and I know it will keep me coming back for years and years to come.

Robert Downs is the author of Falling Immortality: Casey Holden, Private Investigator. A sample chapter of his MANfiction mystery debut, as well as other interesting information about the author, or his main character, can be located at his website. 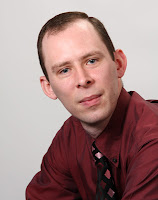 Robert aspired to be a writer before he realized how difficult the writing process was. Fortunately, he'd already fallen in love with the craft, otherwise Casey might never have seen print. Originally from West Virginia, he has lived in Virginia, Massachusetts, and now resides in New Mexico.

Despite his literary side, numbers are very much a part of his world, to the point that he has a business administration degree from West Virginia University as well as an MBA from Columbia College.

To find out more about Casey, visit the author’s website: http://www.RobertDowns.net Falling Immortality is his first novel.

Robert invites you to enjoy this excerpt from his novel, Falling Immortality.

“My husband died,” she said.

She wiped her eyes, but she didn’t shed a tear.

I was accustomed to serious — I’m a former cop — and I couldn’t give it up. “I’m sorry for your loss,” I told her. It seemed like the appropriate thing to say. There’s something to be said for effort.

I needed more to go on. “What’s your husband’s name?”

She paused as if she might be trying to remember. “Artis, Artis Farren. I’m Felicity, his wife. I hear you’re the best, Mr. Holden.”

“Thank you,” I said. “I have an inquisitive mind.”

“It goes with the territory, doesn’t it?” Felicity whipped out a cigarette, and before she even asked if it was okay with me — it wasn’t — she lit it up.

“Indeed it does go with the territory.” I wanted to tell her she could put her cigarette out on her butt. I thought better of it, opened a desk drawer where I kept an ashtray for idiots who hadn’t kicked the weed and placed the ashtray before her on my desk. I’d learned how to handle compromise in my relationships with women — I kept my mouth shut and looked cute. I could even do both at the same time. But that’s beside the point.

Felicity had blown into my office in a blue skirt two inches too short. Her blonde hair and makeup appeared to be sculpted. With hardly a glance from her crystal blue eyes, she sat down in one of my two guest chairs, while I remained behind my mahogany desk ready for action. I’d even leaned back in my desk chair to send a message of confidence and competence.

Money wasn’t an issue for me. I had my parents’ trust fund to keep me afloat — the one thing they hadn’t done when their fancy yacht went down in a storm off the Mexican coast. The PI business didn’t pay all that well, and neither did the cop business, but I loved the work. I cleared my throat and told her, “If I solve it, we’ll talk about my fee. I have reasonable rates.”

“Exactly, only I’m better looking.” I flashed her one of my killer smiles — it didn’t work — so I quickly looked peeved instead.

“Indeed you are — better looking.”

I waited for her to continue. The only thing she did was continue to spew sooty fumes in my face. Finally I gave in and asked, “Why me?”

Felicity took a long drag on her cigarette. “The cops haven’t been much help. It’s been two years now, but they’ve done nothing to solve it.”

“I’m sure they have,” I said. Even though I’m an ex-cop, I still believe cops have good methods; I’m just not sure I could deal with them on a regular basis. So I don’t. Now I just harass them from time to time — it’s more fun that way. Everyone needs their perks, and that’s one of mine. Lots of perks come with being a PI. I set my own hours, I charge an hourly rate, I take vacations on a bimonthly basis, and I consider a lot of beautiful women. I even receive a few tempting offers, but so far I’ve been a good boy. That could change any time now. After all, trouble could come my way almost any day. That’s how life had been with my parents.

First, it had been a near miss in their private jet when the gear wouldn’t lower, but in that case the pilot had saved the day with an ace high, full stall belly landing. Then it had been a car off a narrow road in the Swiss Alps, which carried them into a fifty foot deep ravine. Just one thing after another — they’d walked away laughing . . . I tried not to think about those fantastic people who’d been my parents . . . It was hard to do . . . But back to Felicity and her cigarette.

I had a cup of cold coffee on my side of the desk and, despite the ashtray, a pile of messy ashes. I didn’t like the thought of my mahogany desk (the one piece of really nice furniture I had in my office) turning to charcoal. Nevertheless, I decided to move ahead. “Why don’t you tell me what happened?”

The shaking of her head gave her away: she knew more than what she was telling me which, so far, hadn’t been much. “Why don’t you let me decide that? Tell me what you do know.” I know how to listen or at least make it appear I listen.

“I’m not really sure where to begin.”

“The beginning’s always a good place,” I said.

“Are you a smart-ass for a living?” Her crystal blue eyes snapped shut, then opened, as if this was about to be the end of a beautiful friendship.

She opened her mouth, and then she closed it again.

I liked it when I wrapped a woman’s tongue around her head three times. It was the perfect payback for all the guys out there who have been given the shaft by a smart woman.

Women are smarter than men, especially when it comes to relationships, and ever since I learned this, I’d tried to level the playing field. I’m just one man, and I’ve been known to fall flat on my face a time or two, but I keep trying to even the score. One day maybe I will.

Finally she ended the suspense and said, “It was a random shooting. My husband was at the bar, his regular nightspot. A man just walked in, pulled out a gun like it was an extension of his arm, shot my husband, turned around and left. That was it.”


Places where you can learn more about Robert :

Now for the giveaway!!