A Review of Dinosaurs & Cherry Stems 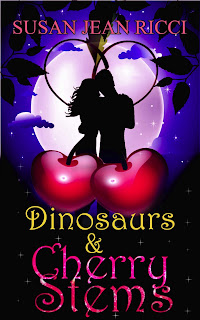 Blurb:
Twice divorced, cynical Cindy Layton feels like a relic with prehistoric baggage, and doubts she can muster the courage to establish a new relationship, even if it's on her own terms.

Her journey out of the Stone Age hits freaky, hilarious turbulence when she joins an Internet dating service. The scammers and weirdoes she meets in cyberspace make Cindy want to crawl back into her cave, until she receives an accidental email from Jay DeMatteo.

Jay has the dating blues, too, but after meeting Cindy, reconsiders his options. Now it's up to him to convince her it's never too late to pursue a meaningful relationship, even when a couple is struggling with midlife adolescence.

A Note From Susan Jean Ricci:

I've been writing since I was a wee child and discovered crayons weren't meant to be part of a food group. My sometimes controversial rants have appeared in my local newspaper, the Asbury Park Press, and I've won several awards via the Writer's Digest 78th Annual Writer's Contest and the Philadelphia Writer's Conference. Over the years, I've been fortunate enough to publish in Parenting Teens Magazine, Good Dog Magazine, and Aim Intercultural Magazine. I'm currently revising a contemporary novel called Slick Trespass and penning the sequel to Dinosaurs and Cherry Stems, The Sugar Ticket. There aren't enough minutes in a day to get everything I wish to accomplish with my prose! Maybe I'll come back in another life as a literary octopus! My novel, Dinosaurs & Cherry Stems, is a humorous, contemporary romance about achieving mid-life adolescence, in spite of the baggage incurred with one's history. My eBook, Heart Marks the Spot: Three Short Stories, can also be found on Amazon for Kindle, as well as a cook book I contributed to called, Dine With Us: A Collection of Recipes from the Authors of Indie Writers Unite. Lot's of yummy recipes and delicious stories can be found here, so don't miss out! My husband, Joseph, and I live in a lovely town in New Jersey close near the sea. Together we have seven children and nine grandchildren.

My Review of Dinosaurs & Cherry Stems:
“Is that supposed to be some sort of threat, Glen? I’m damn good at my job and you know it.”
He scratches his ass quite thoroughly. “Nope, not a threat, just practical advice.”

It was lines like this that made this book so enjoyable for me.

Here’s one more just for fun: I email Larry to go shit in his hat.

This book was very amusing, to say the least. I don’t think I’ve laughed out loud from a book in a long time. It’s an easy to read book, meaning it kept my interest and  I couldn’t wait to get back to it from whatever reason I had to put it down.

It was very entertaining, to go with Cindy, the protagonist, on some of her wild and most often weird dates and I cringed over some of them remembering some of my own. She is a character you just can’t help relating with, particularly if you’ve ever been through a divorce. At first, I wasn’t sure if I wanted to read a book about such a depression topic, having been through the process myself. However, Susan Ricci has a way of taking something bad like divorce and all the crap that goes along with it and making it an interesting and fun read and I found myself nodding with an “uh huh” several times throughout the book. I became a little annoyed with Cindy at one point but within a few short pages I was relieved to see she came to her senses.

Glen was quite a character and loved hating him. That’s about all I’ll say about that guy.

Jay was a breath of fresh air and I’m going to go out on a limb and say I have one of these guys for my very own.

I highly recommend this book to anyone who has been through a divorce, both men and women. Men might learn something and women will surely appreciate the humor as well as the grief.

Posted by Author Susan Griscom at 11:52 AM