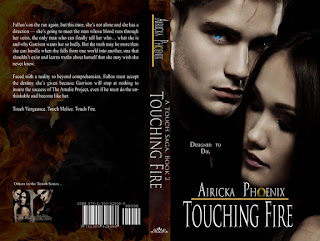 Touching Fire Synopsis
Fallon’s on the run again, but this time, she’s not alone and she has a direction — she’s going to meet the man whose blood runs through her veins, the only man who can finally tell her who… what she is and why Garrison wants her so badly. But the truth may be more than she can handle when she falls from one world into another, one that shouldn’t exist and learns truths about herself that she may wish she never knew.
Faced with a reality so beyond comprehension, Fallon must accept the destiny she’s given because Garrison will stop at nothing to insure the success of The Amalie Project, even if he must do the unthinkable and become just like Fallon.
Touch Vengeance. Touch Malice. Touch Fire.

Excerpt
He was still waiting when I joined him again, composed. He stood with his back against the wall, his hands lost deep into the folds of his pockets. He was studying his shoes, his hair falling in thick fringes over his eyes. Those blue eyes rose, crystalline pools of electricity, and met mine, and my world stopped. My breath stopped. My heart would have stopped if it wasn’t drumming a tempo of pure elation at the sight of him. It ached, so desperate for the need to be closer. God, it was never close enough. I could crawl into him, burrow into his soul and it wouldn’t be enough.
I took a step closer, as unsteady as a new born calf. He caught my hand, reeled me to him without ever pushing away from the wall. I was pulled into the space between his feet, held there as he bent my arm and twisted it around my own waist. I was pressed into him, his thighs hard against mine. I felt his heartbeat through the fingertips he traced over the curve of my cheek.
“Stop touching me,” I gasped, cotton-mouthed, half-crazed by the possibility that he might take me seriously.
“Why?” His breath fanned over my dry and already parted lips.
I opened my eyes, surprised to find them closed. “Because I won’t want you to stop.”
The band of steel around my waist tightened until I was supported only by him, by his arm, his chest, his heat, his scent… God, I was home! My fingers curled into the soft material of his fresh, clean shirt. He must have changed, but it was yet another black t-shirt.
“I can’t.” His lips wrote each word against mine in the caress of butterfly wings.
My bones liquefied. I nearly fainted.
“Why?” The single word was a mere movement of my lips.
His free hand shackled my chin, guided my face up, held me prisoner to eyes much too animal to be human. “Because I don’t want to stop.”
If there was ever any possibility of remembering to breathe, it was gone. I was barely conscious, barely even sane as I sunk into blissful madness cured only by his lips… his touch.
“Touch me!” My desperate plea was met with a fierce growl.
His eyes, dark, feral, bore into mine. “Not here!”
I opened my mouth to protest, to beg, but his finger against my lips became a barricade, trapping the words on my tongue.
“Don’t!” he hissed. His finger drew back, traced the curve of my bottom lip. His eyes followed the slow caress the way a cat watches a canary. “I can’t promise I’m completely in control right now.” 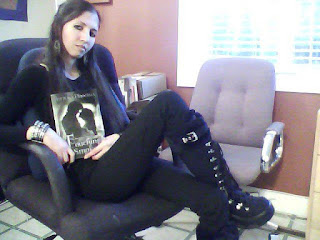 Airicka Phoenix is the best-selling author of the Touch Series with short stories in Whispered Beginnings: A Clever Fiction Anthology and Midnight Surrender Anthology. When she's not hammering away at the keyboard, she can be found banishing pirates or crawling through the attic looking for lost treasure with her kids. She loves baking, gardening and reading. She also likes to travel and take pictures of everything she comes across. When asked, Airicka describes herself as a sarcastic basket case that has an unhealthy addiction to chocolate, old movies and really bad jokes. She loves to laugh, make friends and write. If she could have one wish granted, it would be to spend one day as a fly-on-the-wall inside Stephen King's mind. If she could have two wishes granted, she would ask for a castle dedicated entirely to her overwhelming collection of books.
For more about Airicka, also on how to win giveaways, read author interviews and reviews, visit her website at: http://airickaphoenix.com/Author

Posted by Author Susan Griscom at 8:00 AM