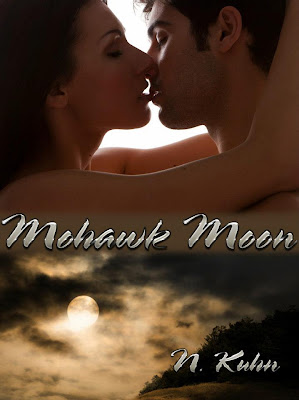 Janelle hasn't been home in ten years. All of a sudden, she has to deal with her mothers death, her broken relationship with her sister, and some sexy stranger following her. She doesn't know whether to be scared, or excited.

Damien needs to restore his families honor. He needs to use Janelle to do it, there's one problem. There's someone standing in the way. He's vowed that no one will stand in the way or getting what's his.

Together they must save what's left of both their families, and along the way, deal with what's going on between them. Join them on the beginning of their journey, under the Mohawk Moon. 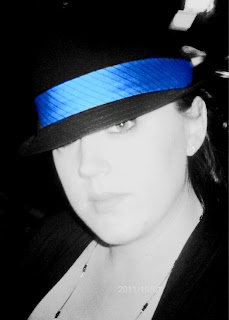 The N in N. Kuhn is actually Nicole. She was born and raised in western New York. She grew up with a love of books, and a passion for writing. She was always found with her nose in a book. She finally decided to take the steps to embark into self publishing at the urging of her Grandmother. Mrs. Kuhn has dedicated her second book to Janet Starr, as she passed just days after being published.

Nicole survives on coffee alone. Mostly Tim Hortons. (It’s a NY thing.) A fan of drinking it from the time she gets up, until she finally rests. When not writing, she crochets and spends time with her beautiful daughter and her husband. Her friends call her Octo-Mom because she multi-tasks so well. Between her full time job, family, crochet and writing, it’s a wonder she ever sleeps.


Mrs. Kuhn feels that reading in our youth is a very important trait to instill. She reads with her young daughter as much as she can. “It’s the most important thing a parent can ever do with a child. Read, teach them to read. Don’t buy them toys, buy them books,” She says.


“Come in,” I say. Sammy opens the door and enters. “The funeral is in forty minutes, get ready.” She turns and leaves, not even waiting for me to answer, slamming my door behind her. I’m left alone again. I sigh and get up. So much for the loving family reunion.

I pull the only dress I own out of my suitcase. I had gotten this little black dress when I thought I would try to date seriously. It was a soft satiny material, hung off the shoulder, and accentuated my curves in all the right places. Not very appropriate for a funeral, but it’s all I had. I slip into it, not bothering to do much with my hair. It’s always been long, thick and straight as a stick. I slide on my black stilettos and stand at my window. I don’t know what possessed me to buy these items. They are so unlike me. I prefer jeans and t-shirts, sneakers, boots, casual clothing. I hated shopping. Seemed a waste when I didn’t need anything.

Not like I ever met any guys worth dating. Most men I met were losers. Criminals, married men looking to cheat, or violent. I wonder which category that man from the station fits into. Why can’t I get him out of my head? What was it about him that worries me? Besides the fact that I believe it was him following us last night. It’s not like I can’t handle dangerous men. Between work and my personal life, I’ve seen it all. I always pick the worst ones to date. I was raised seeing a man treat women like garbage. I know it’s wrong, but I guess I craved the confrontations. I wanted to prove to myself I was stronger than Ahi. Unlike her, I fought back. I slip my .22 short into the small leg holster. I gaze at myself in the mirror. Old habits die hard I suppose. Back in Chicago I won’t go anywhere unarmed. I smooth down the sides of my dress, unnoticeable. Good. I pick up my large black Coach purse, one of the few indulgences I allowed myself, sling it over my shoulder, and I’m ready to go.