An Interview with NELY CAB, Author of CREATURA - Excerpt and Giveaway! 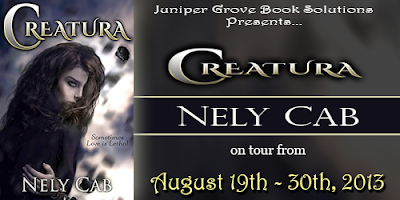 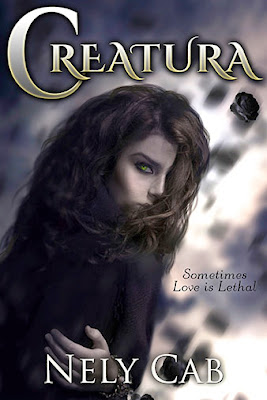 Synopsis: Isis can control her dreams. Or she could—until recently. The creature in her nightmares has been haunting her for months. As if being dumped wasn’t bad enough, now she dreads going to sleep. She decides to confront the creature and win back some of her peace; only, she finds that he’s not a monster and he’s not a dream.

A sacrifice for love, a shocking discovery and a jealous ex-boyfriend blur the lines between reality and dreams, making it hard to tell who the real monsters are. 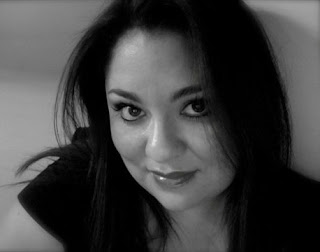 About the Author:
Nely Cab was born on December 9, 1974, in Matamoros, Tamaulipas, Mexico. She has lived and resided in a small, quiet South Texas town most of her life. Putting her Computer Accounting skills to use, Cab worked in banking for several years. In 2001, the author relocated to Monterrey, Nuevo Leon, Mexico, where she dedicated time to the study of culinary arts and the art of oil painting. After her return to the U.S., Nely resumed her employment in banking and later transitioned to the field of Social Work. Today, Nely Cab writes from the comfort of her home, where she lives with her husband and son. Her life goal is to check-off Bucket List Item No. 95,623,351: To Conquer the World. While she aspires world domination, Nely continues to work on her debut series Creatura.
Amazon Author Page | Facebook | Twitter | GoodReads | Blog | Website

Hi Nely, I’m so glad you could join me today. I know your fans are eager to learn a little bit about you, I know I am.

1. When did you decide you wanted to write a novel?
I didn’t. I decided I wanted to write short stories and Creatura just developed into a novel on its own. It was purely accidental.

2.  Is there any message in your novel that you hope to convey to your readers?
Yes, if you read Creatura you’ll find that there it touches on family unity, faith, respect and chivalry. These are things that I feel our younger generations are forgetting. I wrote them in the book in hopes that we’d remember not to take these for granted.

3.  Is there anything unique about the setting for your book?
The setting of the book is in the town I consider home. Los Fresnos is small town with a population of 5000 residents, surrounded by farmland and rural routes. I graduated from Los Fresnos High School, which is the same school Isis attends. The beach is only 25 minutes away from it.

4.  Do your characters seem real to you? Can you relate to their story in any way that you would like to share with your fans?
My characters do feel real to me. If they didn’t, I don’t think I could write their stories. The connection between my characters and me is special, because each of them has a little something from my own personality that I knit into their character. I can relate to the relationship between Isis and David because it’s very similar to experiences I had when I had admirers trying to woo me—of course none of them were deities. They gave me roses, sang to me, serenaded me, held doors open, pulled out chairs...surprised me with chocolate and stuffed animals. And I was only a teenager when all these things romantic gestures happened. Who knew I’d be using these experiences later in life to write a book.

6.  Does your heroine have any of yourself in her? If so, what features are those?
Isis is stubborn and a romantic at heart. She sets her mind on something and nothing can sway her. She’s also too quick to trust people.

7.  Do your characters change throughout the course of the story?
Yes. Through the experiences they live, they become more mature.
8.  Was any part of the book difficult to write or make you feel uncomfortable?
The ending was horrible. I hate scenes like that. I can’t tell you about it because it’ll ruin the story.

2.     Amazing by Kanye West
“I'm a monster, I'm a maven
I know this world is changing
Never gave in, never gave up
I'm the only thing I'm afraid of…”

3.    Love Lockdown by Kanye West
“I'm not lovin' you the way I wanted to
What I had to do, had to run from you
I'm in love with you but the vibe is wrong
And that haunted me all the way home”

10.  Creatura has a gorgeous cover. Can you tell us how you chose the picture?
I was perusing through Phatpuppy’s gallery when I came across it. It was just so very perfect. The model had all the emotions that I wanted portrayed: solitude and a hint of fear that caused her that look of fury.

11.  When you write, are you a plotter or a panster?
I’m mostly a punster at the beginning. Then the plotting comes in when I get that initial high out of my system.

12.  How long did it take you to write Creatura?
It took me a year and a half because I was in no hurry. I really never had given thought to publishing it.

13.  What’s in store for the future. Any other books in the works?
Currently, I’m writing book 2 in the Creatura series; it’s slowly but surely getting finished. I also have a new idea for an untitled New Adult book series, but I’m not sure about that one yet.

14.  Can you describe your writing workspace? If you work at a desk, what is on your desk right now.
I work at a desk. On my left, there are books by other authors and lots of Creatura swag. In the middle and at the desk’s angle (picture a right angle) is my computer right in front of me. Off to the back of the computer and to the left a bit, there’s my wish wall. It’s where I keep pictures of my bucket list items. To my right is a lighted vanity mirror (my desk is misused often lol!) and my diet soda, water and office supplies, like tape, staple, pens etc. It’s a real mess in here!

Fun Stuff
White or Red Wine? Neither.
Favorite Ice Cream? Chocolate and Pistachio
Favorite Food? ALL OF IT!
Favorite place to read? Anywhere that it’s nice and quiet.

Thank you for sharing your most inner secrets with us today.

And thank you for having me as guest!

In my dreams, he watches me. Haunts me. He’s the cause of my nightmares, and the dread of my nights.

My name is Isis Martin, and I’m seventeen years old. I suffer from a sleeping disorder. After three months, I’m finding it difficult to function on one or two hours of sleep per night.


Today I’ve got another session with Dr. Jameson. He’s my best friend’s dad and the only psychiatrist in town. He suggested I start a journal to release my stress and maybe one day I’d be able to sleep again. He says my recurring dream is only a reflection of my anxiety to sleep, but there’s something that tells me he’s wrong.


I had always been able to control my dreams. I don’t know how, but I could. In my sleep I discovered worlds that only existed in my imagination. My favorite was a poppy field where the sun rested over the horizon frozen in time for no one else but me. The meadow with the odd shaped tree that I had named Infinity was my private haven and my emotional sanctuary. In that far away land, night never came and day never broke. It was the place where tears did not fall and worries did not exist…until the nightmares began.


He gazed at me for a moment. Maybe it was just my imagination, but I thought I saw trace of a grin on his face.


“If I should win, you will believe I am not a dream,” David said.


“If you say so,” I snickered. “I guess this is goodbye since I’ll be winning.”


“And…” he continued, “I bid you not farewell, but good morrow.”


David tipped his head as he disappeared, leaving behind a cloud of golden dust.

a Rafflecopter giveaway
Posted by Author Susan Griscom at 1:00 AM