The Music Behind LOVE, LIES, & DECEPTION by L.P. Dover

Please join me in welcoming the lovely L.P. Dover to my blog today as she reveals the The music behind Love, Lies and Deception. But first, a little about the book... 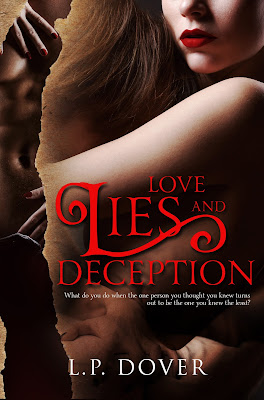 
What do you do when the one person you thought you knew turns out to be the one you knew the least?

Twenty-three year old Marissa Chase, and soon to be college graduate, has everything going for her: wonderful friends, a lucrative degree, and a chance to explore the world. What made it even better – or so she thought – was when her path crossed with the alluring Alec Holden. Unable to stay away from him, Marissa experiences a love like no other, and falls into his world of passion and intrigue. However, things begin to shift when this path takes a deadly turn.

Her trust is put to the test when hidden dangers unfold before her, revealing secrets that have been buried for years. Secrets that were meant to stay hidden. Murder, lies, and betrayal … will Marissa figure it all out in time and escape with her life intact, or will she be too late and fall into the trap of deception?

What a gorgeous cover. Check out the full print version. 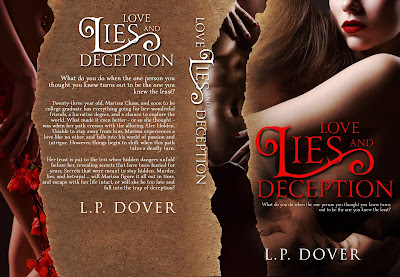 Now for the music behind Love, Lies, and Deception.
The music behind the book is actually an interesting topic. I have no clue why I had such a desire to choose the music I did, but it just felt right. My characters in Love, Lies, and Deception remind me so much of how I was when I was in college. I went to Appalachian State University and that is where I have my characters attending. It brought back so many memories. During my time there, I remembered a lot of the songs I used to jam to back then, most of them being 90’s R&B songs.
When so many of the songs reminded me of my story I thought, “hey, why not have a 90’s playlist?”
Hence, the reason why I have all 90’s songs on my playlist. When I went through my edits, all I did was listen to the songs I had picked out over and over.  What can I say … I’m a 90’s chick.


Back at One by Brian McKnight

Something about L.P. Dover:

L.P. Dover lives in the beautiful state of North Carolina with her husband and two wonderful daughters.  She’s an avid reader that loves her collection of books. Writing has always been her passion and she’s delighted to share it with the world.  L.P. Dover spent several years in college starting out with a major in Psychology and then switching to dental.  She worked in the dental field for eight years and then decided to stay home with her two beautiful girls.
Her works consist of the Forever Fae series, and the Second Chances series. She’s really excited to be able to experience writing in the different genres.  Her reading used to consist of nothing but suspense thrillers, but now she can't get away from the paranormal/fantasy books.  Now that she has started on her passion and began writing, you will not see her go anywhere without a notebook, pen, and her secret energy builder … chocolate.
L.P. Dover can be found at: www.authorlpdoverbooks.com
Email: lpdover@authorlpdoverbooks.com
Twitter: @LPDover
Facebook: https://www.facebook.com/pages/LP-Dover/318455714919114
Amazon: http://www.amazon.com/L.P.-Dover/e/B00AFVV8TG/ref=sr_tc_2_0?qid=1374003942&sr=8-2-ent
Goodreads: http://www.goodreads.com/author/show/6526309.L_P_Dover

Taking a deep breath, I turned around to face him with his hands still holding onto my arms. “Are you asking me on another date?” I asked, teasing him.

He smirked, a slow tilting of his lip that had me aching to bite it. “That’s up to you if that’s what you want to call it,” he murmured heatedly.

“What if I do want to call it that?” I asked boldly.

Alec pinned me up against the counter and placed his arms on both sides of me, locking me in to the confines of his body. His piercing blue gaze held me captive, and I was drowning, struggling to breathe as he moved closer.

Bending low, he continued his torturous teasing by breathing across my neck. My eyes fluttered closed as his lips connected with the tender flesh at my collarbone. I shivered as the chill bumps fanned across my skin and made me weak. His voice in my ear immediately counteracted the chills. “If you want to call this dating, then I think that usually requires a little bit of touching, does it not?”
My breathing accelerated as Alec’s body grew flush with mine, leaning dangerously against me. He tilted my head back slightly so I had to look into his face. Slowly, I placed my hands on his hips, and instead of touching the waist of his jeans I was met with the bare skin of his body where his shirt had lifted up.

Holy shit, his skin felt hot! I could feel the ridges on his sides where they disappeared beneath his jeans, and I wanted nothing more than to trail my tongue down the contours of his muscles.

With hooded eyes, and a raspy, breathless voice, I replied, “I’m sure it’s customary to withstand some touching, but not too much since I don’t know you very well.” I said it, but my body didn’t really mean it, and he could tell I was lying to myself.

Slowly, he brought his hand to my face and trailed one of his long, lithe fingers over my cheek and down my neck. “Like this,” he insisted, swirling his finger around my neck. “Is this the kind of touching we’re allowed to do?” Chill bumps exploded across my skin, making me shiver.

“Yes,” I breathed, relishing in the feel of his touch. “Just like that.”

Closing my eyes, I sighed as he trailed his finger further down, stopping at my navel. The heat of his breath fanned across my face as I felt him dipping lower. I didn’t dare open my eyes and risk breaking the connection, but I wanted to see the heat in his gaze. Ever so slowly, his mouth connected with mine, soft and confident. He lingered for a moment, not moving, just his lips touched lightly to mine.

I wanted more … a lot more.