Review of Eternal Island by K.S. Haigwood and Ella Medler 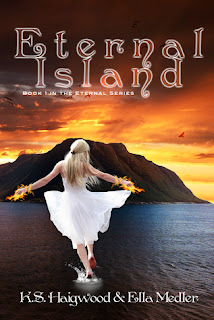 Eternal Island is a paranormal suspense novel, deeply rooted into myth. Vampires and magic form a unique backdrop to a love story with long reaching consequences. Human girl Ariana Lochalan finds herself transported from the relative calm of her ‘Nowhere, Arkansas’ life into a diametrically opposite existence when she discovers she is a powerful witch and meant to wed High Vampire of Eternal Island, Abe Cambridge. Despite first-sight magnetism, the two protagonists are being pushed apart, obstacles tripping them at every step, outside forces interfering and threatening their peace, and ultimately their lives.

A world rich in magic and intrigue, Eternal Island is the first installment of a saga which has love at its core and delves through the mire that is human nature in a turmoil of feeling and emotion. Would courage, resilience and love be enough to bring together two soul mates?

How much would you sacrifice to save the one who owns your heart?

Aw... I actually cried during one of the scenes at the end.

Okay. That's a sign of a good writer. LOL


First, let me say, thank you, K.S. and Ella for letting me read this awesome story for an honest review. I enjoyed it, particularly the second half.


Without having read any description or synopsis, it took me a while to get into the lightheartedness of it all because I expected a "dark" story about vampires and witches. My bad. I found it to be a delightfully lighthearted story about vampires and witches. Once I realized that, I really started enjoying it. It is sort of like a spoof on vampire novels. At first, I kept waiting for it to get serious, but then when it never did, I began to relax and go with the flow. It was a fun read. I laughed and chuckled in parts.


There were times that Arianna, Rainey and especially Becky sounded much like teenagers the way they talked. But like I said above, once I realized the lightheartedness of the story that all became much more acceptable.

Over all, by the second half of the book I was totally involved and needed to find out what happened. You made me laugh and you made me cry. What more could anyone want?