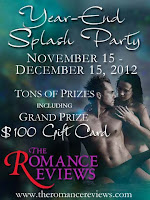 The Romance Reviews
Year End Splash Party!
The Answer is hidden below in this

While Cael signed all the necessary paperwork, he left Addison in the living room gazing out the huge picture window.
“You come with good references. This is a small town and everyone knows just about everyone. Here are the keys. You two have a nice evening, now.” Addison turned toward the two men as Tom glanced in her direction and she blushed as she smiled back. Cael thought she looked radiant.
Cael closed the door and strolled toward her. “So, Addison, welcome to my temporary home.” He stretched out his arms with his palms up, wanting to resume where they’d left off upstairs.
She held up her hand and bent to grab her purse from the table, pulling her jacket tight. “I should go.”
As she started for the door, he caught her arm, bringing her in close to him. He held her, gazed into her soft golden brown eyes. God, how he wanted her—there was no denying it. He put his hand under her chin—tilting her face up to his—his mouth just inches from hers. Searching her eyes, he remembered there was a great possibility she was Ristéard’s daughter and he slowly eased away from her.
“Sorry, you’re right. You should go.”
She almost stumbled as he let go of her. “Right … it would probably be the best thing.”
He noted the disappointment in her voice and he walked her to the door, fully intending to open it, but instead he grabbed her again, pulling her close. This time he didn’t hesitate as he took her face in his hands and pressed his lips to hers. Her lips were warm and tender; he pulled back and stared at her, then covered her mouth with his again, losing himself when she slid her hands up his back and her lips parted. His tongue slid slowly over hers as he heard a soft moan escape from the back of her throat, the desire flooding his body unbearable.
Addison lowered her arms from his back and gently pushed away, ending the kiss.
His heart pounding, he sighed. “I’m sorry.”
“Don’t be. I mean, it was just a kiss.”
She blushed and he was amused at her attempt to sound casual.
He wanted to make love to her right there, but his sudden desire to protect her took over. He wanted to question her about the telekinetic ability he’d witnessed her using at the cliff, but didn’t think she trusted him enough to confide in him yet. He figured she would never share her secret with him if she didn’t trust him. Wanting to be cautious in his approach, he gently placed his hands on her shoulders and asked, “Addison, have you experienced anything strange lately? You know, out of the ordinary.”
There was hesitation in her eyes before she darted them away. “No, why? I’m not sure what you mean.”
He frowned, studying her face—her lips still inflamed from the kiss. She was lying, but he also knew she thought it necessary to protect herself from exposure to the wrong people. It would require time for her to trust him enough.
“Well, be careful, especially when you’re out alone taking pictures or anything else, okay?”
He wanted to stay with her, protect her, and thought of telling her who he really was and why he was there, but realized it was too soon.
“Addison, will you let me cook you dinner, you know, for helping me today?”
“That’s really not necessary, I hardly did anything. I’m not even sure I gave you my opinion.”
“Oh, yes you did, upstairs—you said this place was spectacular.”
Her smile brightened the room. “Yes, I guess I did ... you want to cook me dinner?”
“Yes, I would like that very much. Besides, I need help breaking in the kitchen.”
“Well, okay.”
“When is your next night off?”
“Tomorrow.”
“Good, then I’ll come by for you. Will you be at the bar or at home?”
“I have the whole day off, so I’ll be at home, but you don’t have a car. How will you get there?”
“I’ll manage.” He smiled as he held the door open for her and they walked to her truck.
He wanted to take her in his arms again, but he knew if he did, he wouldn’t be able to control the desire to drag her back inside, rip her clothes off, and kiss every inch of her soft curves.
He cupped her chin in his hand and ran his thumb over her lips. “I’ll see you tomorrow, then,” he said as he opened her truck door and helped her in.

Thanks for Reading and you can find Whisper Cape book 1 and Reflections book 2 of the Whisper Cape series here.